On Wednesday 14th November, 3 days after the 100th Anniversary of the end of WW1, Dartmouth Caring held a commemorative lunch. When clients arrived for their usual Wednesday Lunch Club date it was to find the Community Corner awash with red, white and blue. Flags abounded, and Support Worker Kay Pratley had created a stunning display featuring a cross, and poppies made by the attendees at the Creative Memory Café. The tables were strewn with maps and memorabilia, including song sheets featuring well known war-time tunes. 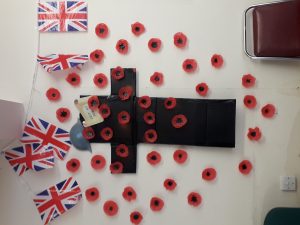 The Lunch Club clients enthusiastically embraced the occasion, bringing with them their own special memorabilia and the shared memories of the realities of living through war. Jean Steele remembered life as a child in London, living through the blitz; school was only attended in the morning or the afternoon as there weren’t enough teachers. Those that were available were elderly, brought out of retirement to take the places of the young men who had been called up to fight. Jean re-called vividly the empty desks that appeared at registration time, no one ever mentioned the child who used to sit there, but everyone knew that they would not be returning. Her best friend Kathleen used to sit in one of those desks and Jean has never forgotten the impact of staring at her empty seat in the morning following a bombing raid. 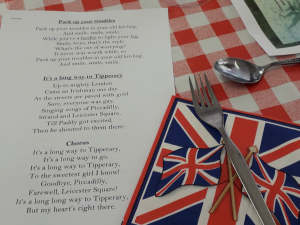 Norman Grindrod’s war memories were of being bombed out in Birmingham where the incendiary bombs fell for months; Norman re-called that when you left your house you could never be sure if it would still be standing on your return. His father was an air-raid warden and helped countless people to safety during the frenzied minutes following the sounding of the siren. One young couple were too far away from their shelter and sought refuge in a tin hut beside Norman’s family’s brick-built shelter, his father recognising the frail nature of the hut hurried them into the more secure building. Moments later a land mine exploded, leaving just a large space where the tin hut had stood. 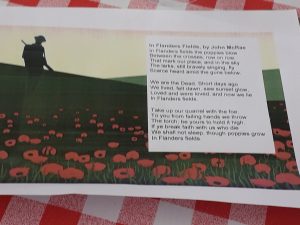 Sue White’s father, Ben Smith, had the dubious pleasure of being given a ‘shout out’ by Lord Haw-Haw. A government engineer, one of Ben’s wartime jobs was the construction of a large ammunition dump near Bath and Lord Haw-Haw warned him that his efforts would be wasted, along with his own personal security. Fortunately, like a lot of Lord Haw-Haw’s boasts, the threats were without substance. Sue and fellow diner, Gladys Riddles vividly re-call carrying their cumbersome gas masks with them wherever they went and their identity cards and numbers; identity cards which are still in their possession. Gladys’ father was in the Battle of Jutland on 31st May 1916, his ship was sunk during the battle and he survived by jumping to safety and clinging to a piece of debris until rescued. Unfortunately, communications were not as swift during WW1 as they are today, and his mother was informed that her second son had gone down with the ship; it was some time before she received news of his rescue. Gladys still has the original news article about this event, carefully protected to preserve its fragile newsprint.

Gladys’ father then went on to serve on destroyers and was on the ship that brought home the body of the legendary Nurse Edith Cavell who helped over 200 Allied soldiers escape from German-occupied Belgium before being arrested and shot by firing squad.

Her father-in-law was a prisoner of war in 1918 and was on duty when the Armistice document was signed in the railway carriage at Compiegne. He met and had great admiration for the Allied Supreme Commander, Marshal Foch and Gladys has in her possession a memento from that time, a smoking pipe, the bowl of which carries the image of Marshal Foch.

The madness of life in war-time London was captured by Beryl de Galleani who for the first part of the war had been an ambulance driver in the capital. She re-called that life had an unreal quality amidst the mayhem which was going on around them; it was a half-life, one life was crowded with horror and death, the other with the determination to grasp the fun of being young and with friends in the capital city. She stated poignantly that one thing you never said when saying goodbye to someone was, “See you soon”, because that was one promise you might both be unable to keep. However, for all the horror, Beryl stressed that it never crossed their minds to dwell on the thought that they wouldn’t, ‘be here tomorrow’, they had important jobs to do and that was what counted. Once her stint as an ambulance driver concluded, Beryl did not leave London for the relative safety of the countryside, instead she transferred to driving staff cars for the War Office, a post she held until the end of the war.

Jill Payne was only 5 years old at the end of WW2, but vividly re-calls the celebrations in Trafalgar Square on VE night. The family was invited up to London by a Jewish friend who, following his escape from Berlin, stayed with the family throughout the war. Jill remembers sitting on his shoulders and being mesmerised by the scenes of joy around Trafalgar Square as thousands flocked onto the streets. Her uncle, John Vernon, had been batman to Field Marshall Montgomery. Other local memories of the end of the war were contributed by Christabel Cox who remembers lorries driving around the village, complete with pianos and accompanied by much singing and jubilation.

As the meal of corned beef mash and vegetables concluded with a delicious pudding of rhubarb crumble and cream and a cup of tea, the diners, volunteers and staff picked up their song sheets and enjoyed some nostalgic community singing of the tunes made famous during the war years. It was an amazing lunch full of memories and history; a history which is still very real for those present at the meal.